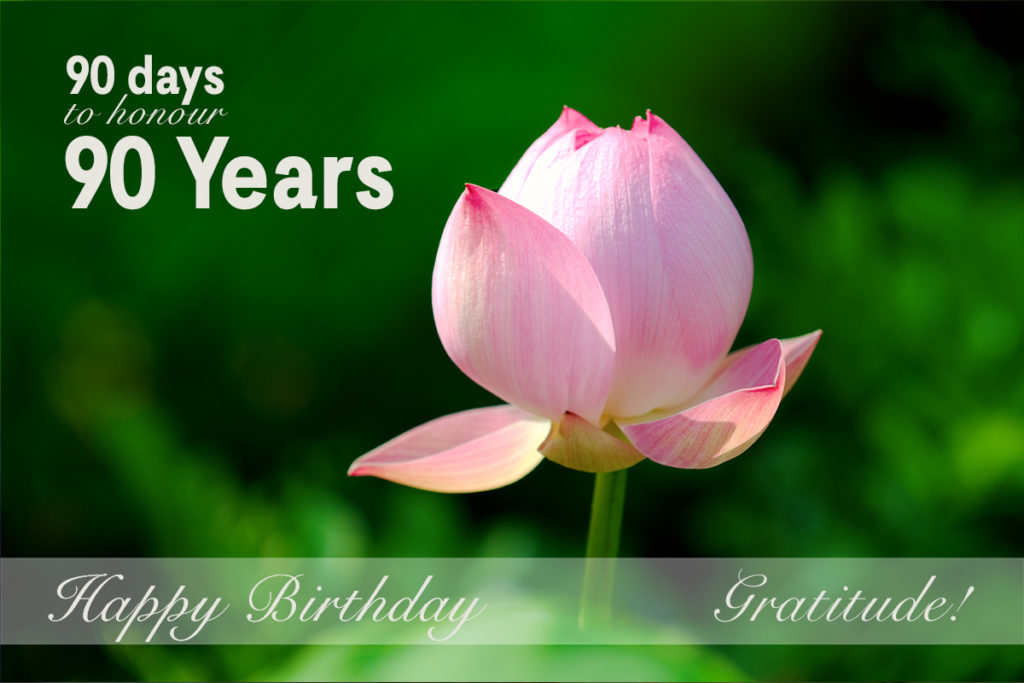 Happy Birthday! August 27, 2021 will commemorate 90 years since the birth of Sri Chinmoy.

Late in May 2021, I realized that on Sunday, 30 May 2021 it would be 90 days until the celebration of that auspicious day. And since I often require a little ‘project’ to get myself inspired — I thought that a neat and tidy ‘90-days-to-honour-90-years‘ seemed a promising challenge.

While I hoped that the 25 or so Enthusiasm-Awakeners’ song group members might join me, I never dreamed that a multitude of other people across the globe would also enjoy this challenge — but they did! I got reports from people joining from Austria, Australia, Brazil, Canada, Czech Republic, Germany, Netherlands, Russia, Scotland, Switzerland, Ukraine, UK and various locations in the USA — including Puerto Rico.

Click here for project materials (songs, scores, mp3s and indexes) and all sets of songs for this project for all days or continue reading for background story, by Parvati

In 2006, for Sri Chinmoy’s 75th birthday a similar idea came to me. It was mid-summer and I asked the Enthusiasm-Awakeners’ singing group if they would be willing to sing 75 songs a day and ‘perform’ the entire set of 1200+ songs that we had so far learned. It was a big commitment as I wanted them to practice and know the songs well for each day’s ‘performance’. I am so proud to say — they all enthusiastically and immediately said ‘yes’!

Because the “Sri Chinmoy Self-Transcendence 3100 Mile Race” was in the midst of taking place right in our neighborhood, we concluded the race course would be a convenient and inspiring place for us to do our ‘performance’. Hey, we might even entertain the runners! We met at the Race for 17 consecutive days to sing those 75 song sets (i.e. 75 songs x 17 days = 1245 songs).

Well! This began a very important chapter in our lives. A good lesson in saying ‘yes’ (with or without immediacy and enthusiasm).

Since Sri Chinmoy quite often visited the Race several times a day, he began to notice us and our regular presence there in the early mornings. We told him about our project and he was very pleased. Then, after we concluded completing the 1200+ songs, he encouraged us to continue coming to the Race each morning to sing (the Race lasts for 52 days each summer). He then began to teach us a brand new song every day.

The next summer, in 2007, he asked if we would be coming to sing each morning at the Race again. You might be surprised to learn that despite all the wonderful experiences I had the previous summer — I did not immediately say ‘yes’. In fact, I suggested that the previous year was a special project just for his 75th birthday — to which he replied, ‘What? 76 is not significant?’. In hindsight, I cannot tell you how very, very grateful I am that we did in fact renew our commitment to this daily morning singing at the Race. The summer of 2007 will forever be etched in my heart and life as ‘the Summer of Grace’. But that is a whole other story!

I encourage you to use the 90-days-for-90-years to do any project that inspires you personally.

The start and end date is not important nor, actually, is the activity. Perhaps you too need a little trick for the mind to … take your vitamins? ,,, meditate more regularly? … take a little walk? … read poems? …… do whatever gives you joy and encouragement.

By special invitation you are most welcome to “join” us in singing for 90 days if you would like to. Because the Enthusiasm-Awakeners ended up learning 1,528 English songs from Sri Chinmoy we will sing through those. We ended up posting approximately 17 songs a day for 90 days (i.e. 17 songs x 90 = 1530 songs).

Keep in mind that the Enthusiasm-Awakeners had previously learned these songs — so this big project (and it is big) is just an inspiring refresher for us. For anyone else who hasn’t previously learned the songs, perhaps consider picking just one song from the day’s set and focus on learning it? Just a suggestion 🙂

With gratitude to all who participated in this project, to those who love and adore these songs as much as I do — and to anyone who aspires to honour and commemorate our beloved Sri Chinmoy,

Click here for project materials including a calendar you can printout; for whatever 90-day challenge you are doing — large or small. And all sets of songs (all days, current and past) as well as indexes (alphabetical and by Day/Set).